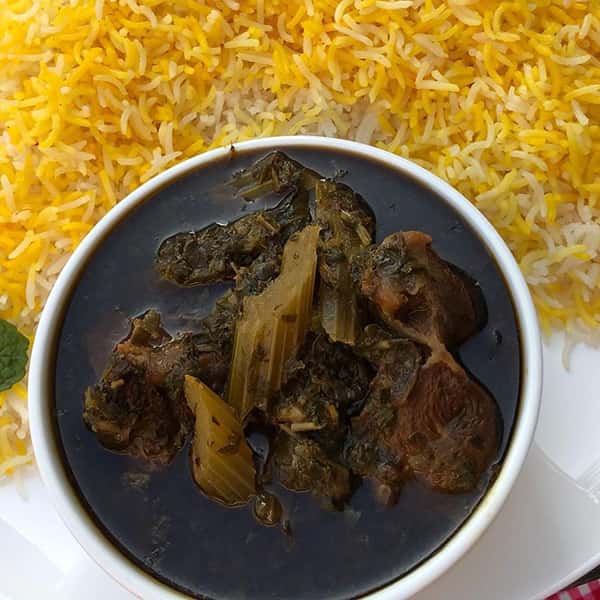 Celery stew is one of the most popular and genuine Iranian stews, which is very similar to Ghormeh sabzi stew. Unfortunately, this food isn’t often seen on Iranian tables and most people prefer Ghormeh sabzi stew to Celery stew; but you’ll be amazed with this stew’s unique taste. Just once make this stew at home and be sure that all family members and guests fall in love with it.

In order to make a good celery stew, first of all separate the celery leaves from its stems, then after washing the celery stems, chop them into 1 to 1.5 centimeter pieces and leave them aside.

In this phase dice the onions and fry them with some liquid oil in a pot that you’ve selected for cooking the stew so that they become soft and clear. Next add some turmeric to the onions and continue frying until the turmeric is fully absorbed by the onions.

An important point about the stewed meat pieces is that they should be cut into medium size pieces. Too small or big meat pieces ruin the appearance of the stew. In this phase cut the meat suitable for the stew and add them to the pot after washing them.

In this phase fry the meat so that its color changes and fries. Pay attention that frying meat makes the stew more delicious, however you shouldn’t fry it too much because it becomes hard in texture and delays cooking.

If you like you can add 1 table spoon of tomato paste to the onions and meat. Adding tomato paste makes your celery stew more delicious and gives it a fine color.

If you added tomato paste to the stew, fry it a bit so that the raw taste and smell is removed from it. In this phase add the chopped pieces of the celery stem to the pot, and in order for them to maintain their posture while cooking fry them a little bit.

Be careful not to over fry the stems of the celery, because it’ll make them dry and hard. After frying the celery stems, add two to three glasses of water to the pot and let the meat and celery stems cook under a slight heat.

If you want your stew to be darker in color, then you should fry the vegetables a bit more. However; this reduces the nutritional value of the vegetables. In the last hour of cooking the meat and the celery stems, add the fried vegetables to the pot containing the stew.

After the meat is fully cooked add some salt and pepper with condiments and flavors like verjuice, lemon juice and even refined tamarind. In the last phase leave the stew for another 45 minutes on the mild heat so that it becomes oilier and cooked completely.

One important point in serving celery stew is that this stew is counted as those stews that aren’t so juicy so that they’d have a better appearance. After the stew is ready serve it with rice molded rice.

Login to quote this blog

You cannot quote because this article is private.